I find it interesting the difference in behavior with querying XML between column assignment, and quoted alias naming. It’s a generally understood best practice to not use the deprecated syntax of column aliasing using a quoted name. For example:

You can see the difference in naming. The bottom too are deprecated syntax from older naming standards, and should be avoided typically. Aliasing is pretty straight forward and the variance in doing your alias pattern doesn’t normally have an actual impact on the results or way of handling… Except when doing with XML apparently 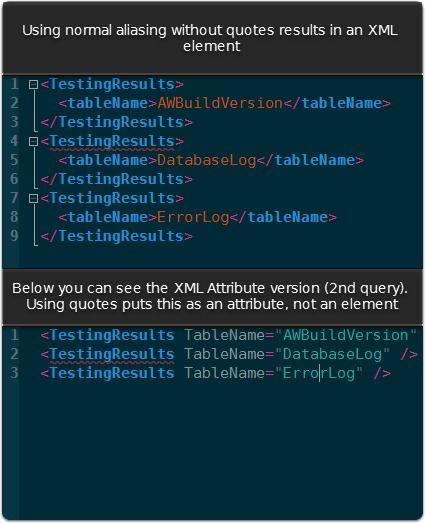 MSDN covers in more detail and precision in the this page The handling of XML is a newer area to me, as previously I’ve avoided like the plague. However, in working w/apps sometimes creating XML configuration files might be useful so exploring this can helpful to understand how to manipulate and even obtain values from it.