Having come from a Team Foundation Server background, I found Git to be a bit confusing. The problem is primarily the big difference in a distributed version control system vs non-distributed. In addition to that complexity the terminology is not exactly intuitive. A lot of phrases like PULL have different results depending on what step you are in.

You Must a TFS’er using Git when…

I claim I’m innocent of any of those transgressions. And yes, I use command line through Cmder to get pretend some geek cred, then I go back to my GUI. :-) I have more to learn before I become a Git command line pro. I need pictures.

The Key Difference From TFS

The biggest difference to wrap my head around, was that I was working with a DVCS (Distributed Version Control System). This is a whole different approach than TFS, though they have many overlaps. I won’t go into the pros/cons list in detail but here’s the basics I’ve pulled (pun intended) from this.

GitKraken, a Git GUI to solve your learning woes.

I’m a Powershell prompt addict. I prefer command line when possible. However, I think GitKraken helped make this process a bit easier for me. I was using posh-git and Cmder initially, then Vscode with GitLens. However, other than basic commit/pull, I’ve found myself relying on GitKraken a lot more, as it’s just fast, intuitive and easier to understand with my addled brain. I’d rather leave energy for figuring out how to get Query Optimization Through Minification

To be honest, their timeline view and the navigation and staging of the changes seemed pretty intuitive to me compared to what I’d seen in other tools. Overall, I found it easier to wrap my head around the concepts of Git with it, and less fear of merging changes from remote as I was able to easily review and accept changes through it’s built in merging tool. 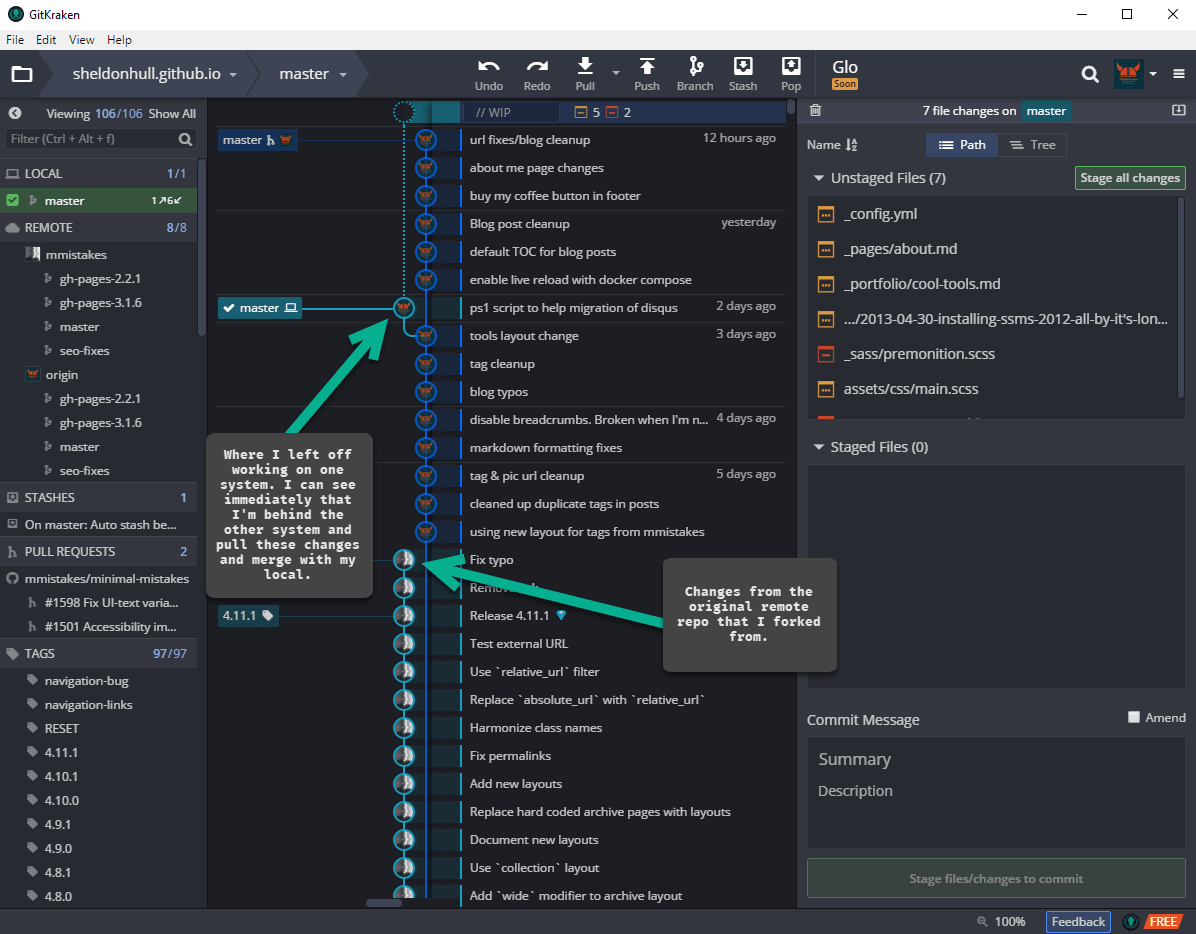 Overall impression is positive. I’d say it’s a nice solution to help with understanding and getting up and running faster than some other solutions, or using Git via command line along. While that’s a worthy goal, being able to easily review changes, amend commits, pull and merge remote changes from multiple sources, and other things, I’m not sure a newbie could do all at any time near what a little effort in GitKraken would provide. So overall, it’s a win. I’ve used it for this blog and am pretty darn happy with it. The cost for professional if using in a work environment with the need for better profile handling, integration with VSTS and other services is a reasonable cost. For those just working with some Github open source repos and Jekyll blogs, they have a free community version, so it’s a win!

Source Tree from Atlassian is a pretty solid product as well that I’ve used. Unfortunatelym I’ve had stability issues with it lately, and it lacks the most important feature required for all good code tools… a dark theme :-)… on Windows at least as of now. No success getting dark theme traction except on Mac. -1 demerits for this omission! Overall it has promise, but it tends towards so many options it can be daunting. I’d lean towards the implementation by GitKraken being much cleaner, designed for simplicity and flexibility.

Disclaimer: I like to review developer software from time to time, and occcasionally recieve a copy to continue using. This does not impact my reviews whatsoever, as I only use the stuff I find helpful that might be worth sharing. Good software makes the world go round!